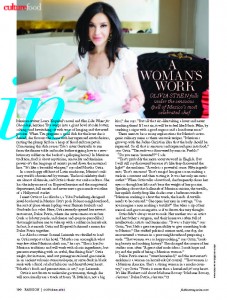 OLIVIA STREN falls under the sensuous spell of Mexico's most celebrated chef.

In Mexican writer Laura Esquivel’s novel and film Like Water for Chocolate, heroine Tita weeps into a giant bowl of cake batter, salting—and bewitching—it with tears of longing and thwarted passion. When Tita prepares a quail dish for the lover she is denied, she flavours the sauce with her repressed erotic desires, resting the plump bird on a heap of blood-red rose petals. (Consuming this dish causes Tita’s sister Gertrudis to run from the dinner table and make bodice-ripping love to a revolutionary soldier on the back of a galloping horse.) In Mexican tradition, food is about mysticism, sensuality and feminine power—it’s the language of secrets passed down the maternal line. “It’s like a beautiful whisper,” says chef Martha Ortiz.

In a rare happy offshoot of Latin machismo, Mexico’s culinary world is dominated by women. The local celebrity chefs are almost all female, and Ortiz is their star ambassadress. She has the inky mane of an Esquivel heroine and the magisterial deportment, full mouth and never-met-a-guacamole waistline of a Hollywood starlet.

I meet Ortiz at Las Alcobas, a Yabu Pushelberg–designed jewel-box hotel in Mexico City’s posh Polanco neighbourhood, the sort of place where lapdogs wear Hermes foulards and Starbucks has valet. Here, Ortiz recently opened her newest restaurant, Dulce Patria, where she serves nuevo-wave fare (such as lobster pozole, and cheese and epazote quesadillas) that might induce one to take up with a soldier on horseback. In fact, last month Ortiz and Esquivel fashioned a menu for Dulce Patria together.

Las Alcobas owner Samuel Leizorek was thrilled to land an Ortiz outpost at his hotel. “Martha can accomplish what very few other Mexican chefs can,” he says. “She is loyal to Mexican traditions and will work with classic ingredients, but presents everything with an artful, fine-dining flair.” Ortiz might, for instance, send out pomegranate-laced guacamole in an ancient volcanic-stone molcajete, or serve duck in black mole with a floral salad of hibiscus and desert-flower heart. “Martha’s food—and presentation—is art,” says Leizorek. Ortiz is not drawn to molecular gastronomy, though she will occasionally use a touch of foam: “A little kiss, not a big kiss,” she says. “But all that air—like taking a lover and never touching them! If I eat air, it will be to feel like Maria Felix, by smoking a cigar with a good cognac and a handsome man.”

There seem to be as many explanations for Mexico’s estrogenic culinary scene as there are mole recipes. “Mexicans grow up with the Judeo-Christian idea that the body should be repressed. So all that is sensuous and repressed goes into food,” says Ortiz. “The mole was discovered by nuns in Puebla.”

“That’s probably the more accurate word in English. But I will still say discovered because it’s like they discovered the light!” she exclaims. “A mole is a powerful sauce. Fifty ingredients. "That’s sensuous! That’s magic! Imagine a nun making a mole in a convent and then tasting it. It was her only sensuous outlet.” When Ortiz talks about food, she frequently closes her eyes as though her lids can’t bear the weight of her passion. Speaking about that hallmark of Mexican cuisine, the tortilla, her eyelids slowly drop like shades over a bedroom window. “Mexican cooking is about the touch, the hands. A tortilla needs to be caressed.” She opens her eyes in outrage. “Can you imagine a man making a tortilla?” She takes a sip of her mescal-and-guava margarita as if to drown the very thought. Ortiz didn’t always want to cook. Her mother was an artist and her father a surgeon, and their home was often full of intellectuals, artists and luminaries. “It was a fairy tale,” says Ortiz, “but I felt a great responsibility to give something back to Mexico.” She studied political science until, one day, she encountered a woman in a poor neighbourhood preparing a mole. “That woman was so happy cooking,” says Ortiz, “cooking beauty and cooking history.” She changed the course of her studies soon after. “A great chef cooks ideas. I cook hope and joy and the pride of being a Mexican woman.” Dulce Patria means “sweet homeland,” and the restaurant’s emblem is a woman on horseback (of course). “That woman is a Mexican Amazon. She’s a strong woman in a macho country,” says Ortiz. “Patria is more than a homeland; it’s my heart. It’s like Flaubert said about Madame Bovary: ‘Madame Bovary, c’est moi.’ Dulce Patria, c’est moi.”